Higher Education in 2021 and Beyond: The National Outlook 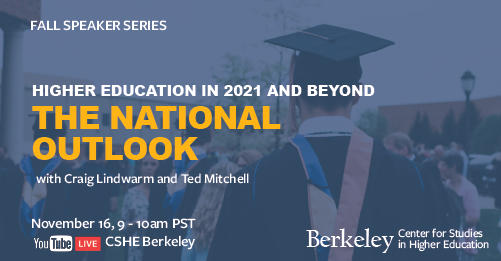 Will 2021 witness a new relationship between the federal government and public colleges and universities?

State budgets are currently strained by costs of Covid-19 and resulting loss of revenue from unemployment and residents’ decreased earnings. This suggests that higher education budgets could be cut substantially. Enrollment numbers of nonresident students may also continue to be reduced by travel problems. The federal government already works with colleges and universities via student financial aid, scientific research funding and via other programs. But without federal assistance, public higher education budgets could face a crisis. How will federal funding and policy change in the next few years?

Craig Lindwarm joined APLU in 2012 where he serves as Vice President for Governmental Affairs. In this role, he works closely with the leadership of APLU’s more than 230 member universities to advance the education, research, and engagement missions of public research universities in partnership with the federal government. Craig manages a talented team of advocates in APLU’s Office of Congressional & Governmental Affairs and works particularly closely with APLU’s Council on Governmental Affairs, which consists of the federal relations officers of APLU member universities, to promote public higher education’s priorities to Congress and the Executive Branch.

The Office of Congressional & Governmental Affairs is deeply engaged in federal policy of interest to member universities including budget and appropriations priorities, higher education access, affordability, accountability, campus safety and other issues within the purview of the Higher Education Act, science, research and economic development, tax and business issues, technology and intellectual property, and immigration and international development, among other priorities.

Prior to joining APLU, Craig served as a Senior Legislative Assistant and Deputy Communications Director on Capitol Hill where he led policy work on education and judiciary issues and new media communications for a senior member of Congress. Craig is a graduate of St. John’s University School of Law where he earned a J.D. and Binghamton University, State University of New York, where he earned a B.A. in political science and history

Mitchell brings a wide array of experience and accomplishments from across the higher education sector to ACE, as well as a long-standing focus on helping more students gain access to a postsecondary education and complete their degrees. His background includes service as president of a private liberal arts college, senior administrator at a state university, and trustee of a major research insti​tution.

He has also served as vice chancellor and dean of the Graduate School of Education and Information Studies at the University of California, Los Angeles, and professor and chair of the Department of Education at Dartmouth College. He has been a member of the Stanford University Board of Trustees.

Prior to becoming under secretary of education, Mitchell was chief executive officer of the NewSchools Venture Fund from 2005–14, which provides seed capital and counsel to leading education entrepreneurs at the K–12 level, and served as the president of the California State Board of Education. After concluding his service at the Department of Education, Mitchell served as a consultant to ACE in the areas of education attainment and innovation and leadership development.

Mitchell received his bachelor’s, master’s, and PhD degrees from Stanford University. He lives in Washington, DC, with his wife, Christine, and their two children.