The Impact of COVID-19 on University Research and International Collaborations 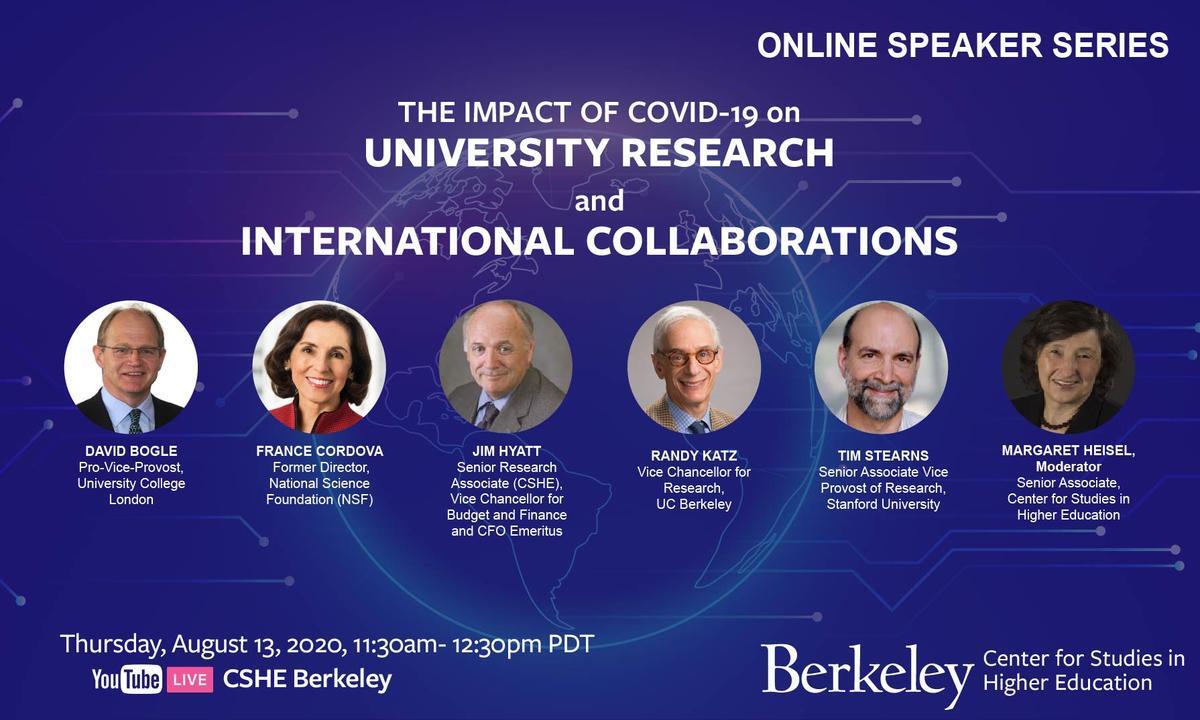 International knowledge networks are essential for research and research is a core function of universities. All aspects of university work are currently strained by the Covid-19, but international programs, including research collaboration, are especially pressured.  These programs have produced some of the most creative and innovative results in many disciplines.  This panel will discuss both the challenges that international research collaboration is facing in the current environment and will describe plans for supporting these efforts and planning for their future post-pandemic.

David Bogle: Professor David Bogle is Pro-Vice-Provost (Graduate Dean) of the University College London (UCL) Doctoral School - the role is to lead the strategy for early career researcher development (doctoral and postdoctoral) at UCL. UCL has over 5,500 research students and 3500 postdoctoral researchers. Professor Bogle is Chair of the League of European Research Universities (LERU) Doctoral Studies Policy Group and member of several advisory boards for early career researcher development in Europe including currently at the University of Zurich and RWTH Aachen, and previously for the Luxembourg National Research Agency, the University of Vienna, and the Doctoral Training Group of European Research Area Working Group on Human Mobility and Resources. He is a panel member of the French Agence National de Recherche Ecoles Universitaires de Recherche Programme (2017-19). Professor Bogle is the lead author on three LERU policy documents on Doctoral Training and recently chaired a review of the UK’s Concordat for the Career Development of Research Staff.

Dr. France A. Córdova: The Honorable France A. Córdova is an astrophysicist and was the 14th director of the National Science Foundation (NSF). Córdova was nominated to this position for a six-year term by the President of the United States in 2013 and subsequently confirmed by the U.S. Senate. NSF is a $8.5B independent federal agency; it is the only government agency charged with advancing all fields of scientific discovery, technological innovation, and STEM education.

Córdova has been a leader in science, engineering and education for four decades. She has a distinguished career in both higher education and government; her contributions in multi-spectrum research on x-ray and gamma ray sources and space-borne instrumentation have made her an internationally recognized astrophysicist. She is president emerita of Purdue University, chancellor emerita of the University of California, Riverside and former vice chancellor for research at the University of California, Santa Barbara. Córdova served as chair of the Board of Regents of the Smithsonian Institution and on the board of trustees of Mayo Clinic. She also served as NASA's chief scientist and is a recipient of the agency's highest honor, the Distinguished Service Medal. Prior to joining NASA, Córdova was the astronomy department head at Penn State and deputy group leader at Los Alamos National Lab. She has received numerous honorary degrees and awards for science, education, and innovation.

She received her B.A. from Stanford University and her Ph.D. in physics from the California Institute of Technology.

Randy Katz: Randy H. Katz has served since January 2018 as Vice Chancellor for Research with responsibility for Berkeley’s research endeavor. He provides primary leadership in research policy, planning, and administration, including relations between the university and industry, research compliance, research communications, and research support for the campus.

He received his undergraduate degree from Cornell (1976), and his M.S. (1978) and Ph.D. (1980) degrees from Berkeley. He joined the Berkeley faculty in 1983. Since 1996 he has been the United Microelectronics Corporation Distinguished Professor in Electrical Engineering and Computer Science. He is a Fellow of the Association for Computing Machinery, the Institute of Electrical and Electronics Engineers, and the American Association for the Advancement of Science, and a member of the National Academy of Engineering and the American Academy of Arts and Sciences.