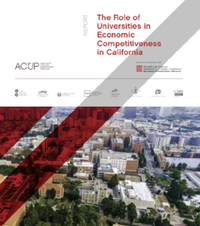 February 14, 2018 – A new report authored by CSHE researchers John Aubrey Douglass and C. Judson King provides a case study of the University of California’s (UC) role in helping to create a highly competitive California economy. Research universities are important players in larger innovation ecosystems. The report explores the economic impact of UC on California, provides specific examples of university-private sector engagement, and outlines policies that set what the authors call the “rules of engagement” to encourage economic engagement while protecting academic freedom and university autonomy.

The report was commissioned by the Associació Catalana d’Universitats Públiques (ACUP) to help inform and guide policymaking in Catalonia. Douglass notes that, “We took the request by ACUP to generate a report that provides a broad scoping of UC's policies, research activities, and engagement with the private sector and local communities, that has fueled California ’s emergence as the 6th largest economy in the world." King adds that, “Although California’s success is embedded in the specific character and history of California itself, there are many aspects of the California story that can be distinctly helpful when considered in the contexts of the situations, needs, and opportunities of other countries.”

The Autonomous Region of Catalonia holds a similar position to California as an economic innovator and driver for the Spanish economy, but with a substantially smaller population. Nearly 19 percent of Spain’s GDP is produced in the relatively small region of Catalonia. Catalonia's universities and businesses account for 25 percent of Spain’s production of scientific research, including patents and licenses.

"The growing acceptance of new growth theory relates, in part, to a number of highly touted regional success stories—or what we term Knowledge Based Economic Areas (KBEAs) in this report,” state Douglass and King. "The United States, and California in particular, are viewed as perhaps the most robust creators of KBEAs, providing an influential model that is visited and revisited by business and government leaders, and other universities, that wish to replicate their strengths within their own cultural and political terms."

The authors note in the report: "It is our sense that the unique culture of Catalonia, its present economic role in Spain and in the European Union, existing private sector strengths, and the entrepreneurial drive of its businesses and universities provide an opportunity to increase the economic and social impact of its public universities. Self-reflection, the search for best practices and new ideas, and a willingness to adopt and change are essential elements for seeking productive innovation systems."

The report was largely completed before the October 2017 referendum seeking Catalonia’s independence from Spain. The authors do note that, "The political instability, decreased autonomy, and increased authority of the Spanish central government in Madrid, may, in the short-term, limit or constrain the ability of ACUP institutions to reach their full potential."