Cécile McGrath, née Hoareau, is a Managing Consultant at ICF, where she manages the portfolio of policy research in education and research and innovation policy for European Union institutions.

Cécile’s research has informed various governments and European institutions. For example, she advised the British Government on ways to measure student learning (Learning gain in Higher Education in 2014), which prompted several higher education institutions to pilot measures to assess how much students learn throughout their degree. She has also supported the reform of the funding system of higher education in Slovenia with Prof. Frank Ziegele. She has also advised the organisation of the Ethiopian Government in combining its education and research portfolios through a review of European practices.  She gave evidence to the European Parliament Education and Culture Committee on how the equity and standards of admission requirements to higher education in Europe compared to the ones in the US, Japan and Australia (report here, 2015). And her research on Business-University cooperation in North America here has informed the European Commission.

Cécile was a postdoctoral Fulbright-Schuman researcher at the CSHE in 2010-2011. While in Berkeley, she researched on student loan designs in the US in comparison to the EU with the view to informing an EU-wide student loan facility, that she subsequently contributed to evaluate.  She subsequently worked at UNU-MERIT, a joint research centre between the UN and the University of Maastricht and RAND Europe, the European branch of the RAND Corporation, before moving to public policy consultancy; where she leads projects on European higher education.

Cécile has a doctoral degree from the London School of Economics, that she wrote on the Bologna process (thesis available here).

With Jongbloed, B. et al. (2022) 'The State and effectiveness of national funding for the European Universities Initiative' Brussels: European Commission. 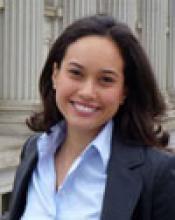 Bring the World to California: A Global Hub for Higher Education