Approaching a Tipping Point? A History and Prospectus of Funding for the University of California by John Aubrey Douglass and Zachary Bleemer

In its first four decades, UC depended largely on income generated by federal land grants and private philanthropy, and marginally on funding from the state. The year 1911 marked a major turning point: henceforth, state funding was linked to student enrollment workload. As a result, the University grew with California’s population in enrollment, academic programs, and new campuses. This historic commitment to systematically fund UC, the state’s sole land-grant university, helped create what is now considered the world’s premier public university system.

However, beginning with cutbacks in the early 1990s UC’s state funding per student steadily declined. The pattern of state disinvestment increased markedly with the onset of the Great Recession. As chronicled in this report, the University diversified its sources of income and attempted to cut costs in response to this precipitous decline, while continuing to enroll more and more Californians. Even with the remarkable improvement in California’s economy, state funding per student remains significantly below what it was only a decade ago.

Peering into the future, this study also provides a historically informed prospectus on the budget options available to UC. Individual campuses, such as Berkeley and UCLA, may be able to generate other income sources to maintain their quality and reputation. But there is no clear funding model or pathway for the system to grow with the needs of the people of California. UC may be approaching a tipping point in which it will need to decide whether to continue to grow in enrollment without adequate funding, or limit enrollment and program growth to focus on quality and productivity.

Funding support was provided by the Center for Studies in Higher Education of the Goldman School of Public Policy, Speaker Emeritus John A. Pérez, and UC Berkeley Deans Henry E. Brady and Bob Jacobsen. The views expressed are those of the authors. 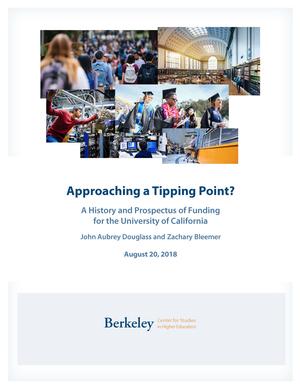