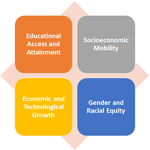 This current CSHE project takes a Big Data approach to exploring the history and role of the UC campuses in the state of California.  The project will produce an unprecedented large-scale empirical examination of the university’s funding, students, professors, institutional structure, and the university’s impact on socioeconomic mobility and economic development.

History of the 1960 California Master Plan

This websource provides access to digitized historical documents, images, and analysis related to the development of the 1960 Master Plan for Higher Education in California, and subsequent reviews of this important watershed in the history of American higher education.

This websource provides access to a collection of digitized historical documents, images and materials, along with past and current analysis on the history of the University of California.

Digitized and searchable biographies of UC faculty and administrators authored by UC colleagues and published annually by the Academic Senate. 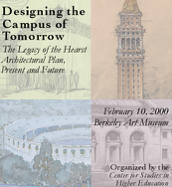 An Exhibit and extensive digital collection of campus drawings and campus plans for the Berkeley campus 1896-1930 and proceedings from the symposium Designing the Campus of Tomorrow: The Legacy of the Hearst Architectural Plan, Present and Future.

Symposium held in 1999  on the 50th anniversary of the UC’s Loyalty Oath Controversy and Websource that including a gathering of historians, University administrators past and present, non-signers, and opponents of the oath who reflected on the significance of the loyalty oath and academic freedom. Collected here are historical documents relating to the controversy.

UCHDA Online Exhibit: The University at the Turn of the Century: 1899-1900

A look at academic life, students, sports and events at the turn of the 20th century. 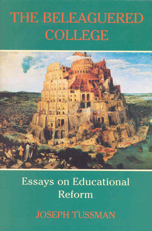 These historical works, published by the Institute of Governmental Studies or co-published with CSHE, include The Clark Kerr Memoir Project—a series of monographs on the Kerr era (1952-1967)—as well as specific topics related to the University’s emergence in the nineteenth and twentieth centuries and its growth into today’s global institution. 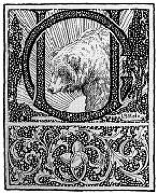 A CSHE-sponsored journal that published articles on the history of UC and featured research on a broad range of issues related to the academic and social impact of the university in California. 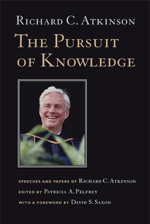