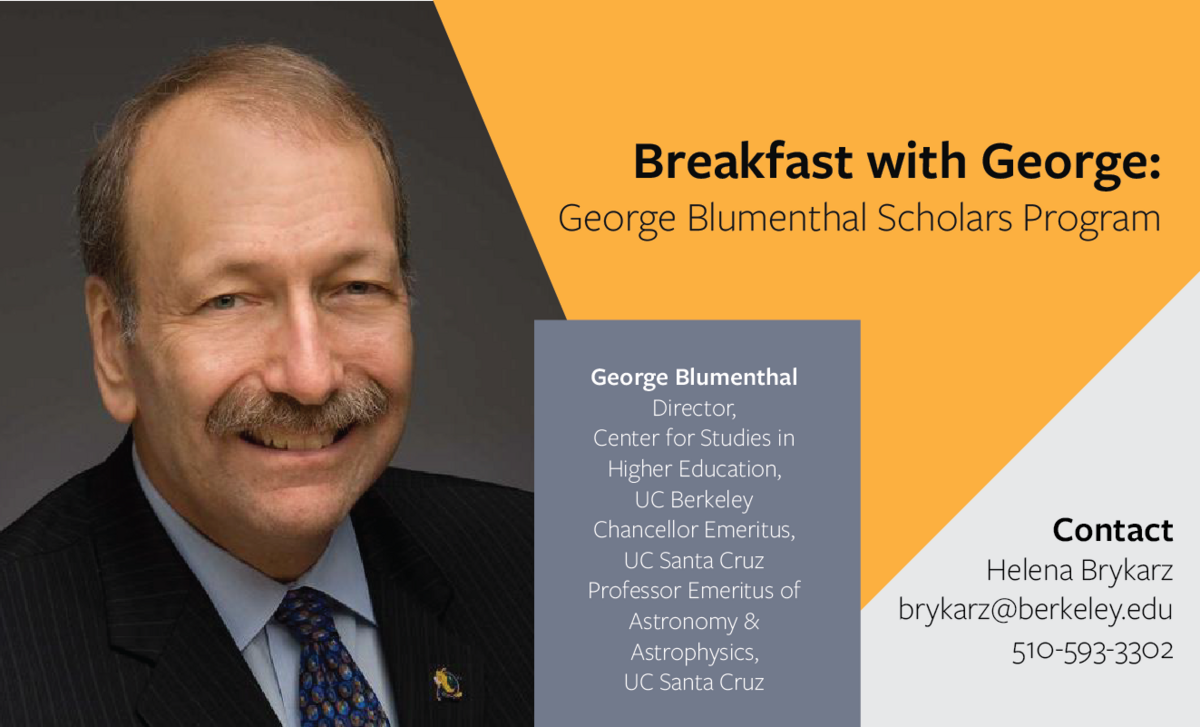 Join the Breakfast with George community for an intimate and personalized mentoring experience.

Breakfast with George is an exclusive opportunity to benefit from the experienced mentorship of George Blumenthal, Chancellor Emeritus, University of California, Santa Cruz. Currently serving as Director of the Center for Studies in Higher Education at the University of California, Berkeley, George Blumenthal has nearly 50 years of experience in higher education, as a professor of astronomy, leader of the UC systemwide faculty senate, and Chancellor of UC
Santa Cruz for 13 years. George has successfully mentored countless colleagues and friends at various career stages. Breakfast with George provides mentorship for a select group of senior level professionals to explore and share their professional challenges in higher education.

The program meets weekly for 5 weeks from 8:00am to 9:30am Pacific time. The participant group is small enough to allow for inclusive discussion. Additionally, George Blumenthal will schedule an individual mentoring session with each participant.

The cost of the Spring Session is $5,000. Space is limited, so early application submission is encouraged. To apply, please fill out the application. Please be sure to also submit a CV to cshe@berkeley.edu to complete your application.

George R. Blumenthal is formerly UC Santa Cruz's 10th chancellor. He joined the campus in 1972 as a faculty member in astronomy and astrophysics and was named chancellor on September 19, 2007, after serving as acting chancellor for 14 months.

Blumenthal's appointment as chancellor followed many years as a distinguished professor, researcher, and campus leader. As a theoretical astrophysicist, Chancellor Blumenthal made pathbreaking contributions to our understanding of the origin of structure in the universe, including galaxies and clusters of galaxies, and to the role that dark matter plays in the formation and evolution of this structure. He is a co-author of two textbooks, 21st Century Astronomy and Understanding Our Universe.

As a senior leader in the University of California system, Blumenthal spearheaded the successful effort to redress past inequalities in per-student state funding of some UC campuses, known as "rebenching." He served as chair of the UC Academic Senate (2004-05), was the faculty representative to the UC Regents (2003-05), chaired the UC Santa Cruz division of the Academic Senate (2001-03), and served as chair of the UCSC Astronomy and Astrophysics Department.

George Blumenthal has been an invaluable advisor and mentor to me.
As a noted scholar and very successful Chancellor in the UC system,
George possesses a unique perspective on the array of leadership
challenges we face in higher education during the pandemic.
Joseph Castro, Chancellor-Select of California State University

George is a natural scholar/teacher /mentor, who finds a way to first understand your mindset and point-of-view, and then he knows how to introduce more expansive information and points-of-view….I have sought him out for 20 years: and seek him out today. …George is the epitome of a great mentor. I am glad that he is mine.
Michael Brown, Provost and Executive Vice President for Academic Affairs, UCOP

George served as an exceptional advisor and mentor regarding
my own career. Our conversations were thoughtful and honest, providing
insights and perspectives that enabled me to be a stronger leader. I am
forever grateful for the enrichment and mentorship I received from my
"breakfasts with George."

Dr. George Blumenthal has been one of the most generous and kind mentors of my careers. His wisdom, born of long experience in these complex times, and his deep commitment to the values and mission of
higher education, make conversations with him an incredibly enriching experience. I am grateful for his guidance.