The Dream is Over: The Crisis of Clark Kerr’s California Idea of Higher Education by Simon Marginson (2016) 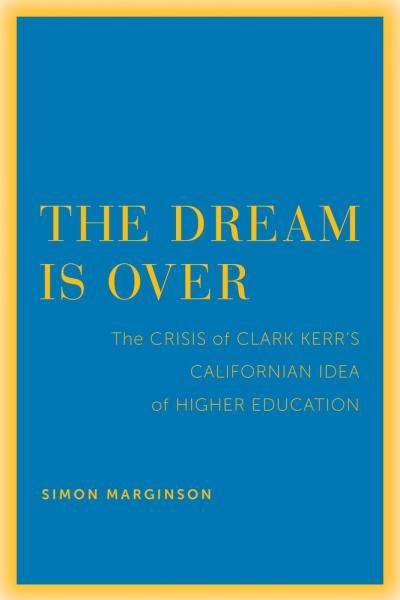 Co-published by CSHE and UC Press, The Dream is Over begins with the story of the 1960 Master Plan for Higher Education in California, created by visionary University of California President Clark Kerr and his contemporaries, and artfully expanded on earlier pioneering efforts of Californians to build the first coherent mass system of higher education. The Master Plan’s promise of equality expanded educational opportunity, while helping to bolster the University of California as the world’s leading network of public research universities.

Part I of the book starts from the legacy of Clark Kerr and the 1960 Master Plan for Higher Education in California, noting the strengths and weaknesses of that framework. Part II reflects on the spread of the Californian ‘Multiversity’, and the influence of the system model, throughout the world, especially in East Asia. There is some discussion of rising China in science, and US/China relations. Part III then discusses the gathering and growing difficulties faced by public higher education in America, in the context of an increasingly unequal economy and society.

The California Idea, as first outlined by CSHE researcher John Aubrey Douglass in his book, has had great influence in the rapid growth of universities in China and East Asia. Yet, remarkably, the political conditions supporting the California Idea in California itself have evaporated. Universal access is faltering, public tuition is rising, the great research universities face new challenges, and educational participation in California, once the national leader, lags far behind. Can the social values embodied in Kerr’s vision be renewed?

The Clark Kerr Lectures on the Role of Higher Education in Society was established in 2001 by the Center for Studies in Higher Education on the Berkeley campus. Initial funding for the lectures was provided by the University of California's Office of the President, and major complementary funding provided by the Carnegie Corporation. The Lectures provide a forum for analysis and reflection about the forces shaping universities and the complex roles they play in modern society.  Recipients of the honor are selected once every two years and are sponsored by the Center for Studies in Higher Education.  Lectures are given at one or more of the university's ten campuses.  Previous holders of the lectureship include, Harold Shapiro, Charles Vest, Donald Kennedy, and Hannah Gray, and most recently Neil Smelser.

All past Kerr Lectures are available via the UCTV Clark Kerr Lectur Series website.