Dynamics of the Contemporary University: Growth, Accretion, and Conflict by Neil J. Smelser (2013) 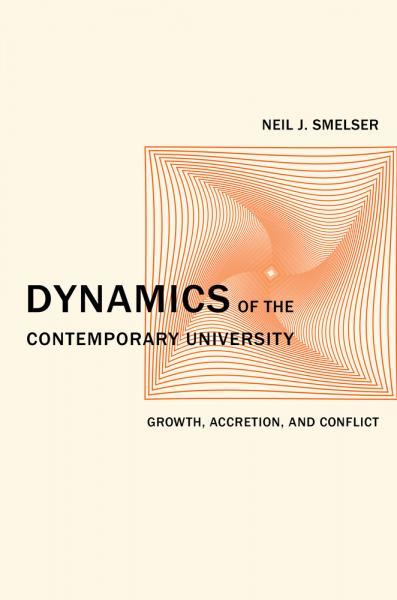 This book is an expanded version of the Clark Kerr Lectures of 2012, delivered by Neil Smelser at the University of California at Berkeley in January and February of that year. The initial exposition is of a theory of change—labeled structural accretion—that has characterized the history of American higher education, mainly (but not exclusively) of universities. The essence of the theory is that institutions of higher education progressively add functions, structures, and constituencies as they grow, but seldom shed them, yielding increasingly complex structures. The first two lectures trace the multiple ramifications of this principle into other arenas, including the essence of complexity in the academic setting, the solidification of academic disciplines and departments, changes in faculty roles and the academic community, the growth of political constituencies, academic administration and governance, and academic stratification by prestige. In closing, Smelser analyzes a number of contemporary trends and problems that are superimposed on the already-complex structures of higher education, such as the diminishing public support without alterations of governance and accountability, the increasing pattern of commercialization in higher education, the growth of distance-learning and for-profit institutions, and the spectacular growth of temporary and part-time faculty.

The Clark Kerr Lectures on the Role of Higher Education in Society was established in 2001 by the Center for Studies in Higher Education on the Berkeley campus. Initial funding for the lectures was provided by the University of California's Office of the President, and major complementary funding provided by the Carnegie Corporation. The Lectures provide a forum for analysis and reflection about the forces shaping universities and the complex roles they play in modern society.  Recipients of the honor are selected once every two years and are sponsored by the Center for Studies in Higher Education.  Lectures are given at one or more of the university's ten campuses.  Previous holders of the lectureship include, Harold Shapiro, Charles Vest, Donald Kennedy, and Hannah Gray, and most recently Neil Smelser.